The Lufkin Host Lions Club was founded only three years after the organization of LIONS INTERNATIONAL itself, and celebrated its 95th anniversary in January 2016.

In 1920, Kester Denman met with Ernest Kurth, W. C. Trout and others at the Lufkin National Bank to discuss organizing a Lions Club in Lufkin.  Mr. G. M. Cunningham, a representative of Lions International and Texas’ first District Governor from the Houston area, was requested to come to Lufkin to organize the city’s first civic club.  The Club was organized on October 4, 1920, and chartered with 37 members on January 15, 1921, at the Christian Church basement. K. W. Denman, Sr. was Charter President and J. C. Carter was Charter Secretary.  The Charter members and their classifications are as follows:

None of the Charter members are living today.

Kester Denman, Sr., seems to have been the driving force in organizing and establishing Lionism in Lufkin.  Mr. Denman was the only Lions member to serve three terms as President from 1920 to 1922, and again in 1936-37.  He made his final farewell to the Club at its 45th anniversary banquet held at the Angelina Hotel in March of 1966.  The  Club presented Mr. Denman with a life membership in Lions International, and recognized his contributions in organizing and overseeing Lufkin’s first civic club.

The Club reached the half century mark in October of 1970, and commemorated the occasion with a banquet at the Angelina College.  Guest speaker was Lions International President-Elect Tris Coffin of Montreal, Quebec, Canada.  Paul Mayberry, Club President, presided at the meeting.

During 1982, with Wayne Lawrence serving as president, the club climbed into the “top 21” clubs in membership in Lions International for the first time.

In February of 1983, the Club was privileged to receive a visit from Lions International President E. J. “Ebb” Grindstaff in honor of the Club’s achievement of being the 12th largest in the International Association composed of more than 35,800 Clubs worldwide.  Club President, J. D. “Kip” Miller, Jr. presided at the meeting.

Our current membership of over 285 now ranks our club among the largest of the 45,000 clubs in the world, and part of the worldwide Lions membership of 1,300,000  in 190 countries and geographical areas. In the United States, Lufkin Host ranks 4th in total membership; and 19th worldwide.

The Lufkin Host Lions Club is proud of its success, but the true beneficiary of this success is the Lufkin community.  Through the Lions, hundreds of thousands of dollars are donated to fund community service and building projects.

When the need arose for an out-patient center here to provide physical therapy, speech therapy, and psychological testing, the Lions took on the project, hence the beginning of what is now the Wilson McKewen Rehabilitation Center.

Involvement in the Annual Benefit Rodeo began in the early 1960’s when the Club was invited to handle the concession sales.  Later in 1965, prompted by the late Wilson McKewen, a Lufkin Host Club Lion, a non-profit organization was formed between the Lufkin Host Lions Club and the Angelina County Mounted Patrol for the sole purpose of raising funds for the treatment center and other charities.  The Rodeo, held each  April, has been a profitable venture since 1970 with over $1,000,000 raised for community projects.  A Rodeo Coordinator was established in 1972 with Raymond Havard of the Angelina County Mounted Patrol serving from 1972 to 1974, Lion Paul Mayberry 1975, and Lion Mike Mathis from 1976 to present. The annual PRCA sanctioned Rodeo ranks among the top seven in the world. According to "Mr. Rodeo", Mike Mathis “That’s because it has style, color, speed and class.” The results - grossed over $300,000 in 2016 and netted over $100,000 and continues to be one of the most successful and anticipated events in Angelina County.

The Rodeo entered the new millennium poised to be one of the top rodeos in the country. In December of 1999, the PRCA announced the launch of a pro tour and dramatically increased television programming in the year 2000.

The pro tour consists of ten PRCA-sanctioned rodeos and a championship event in June in Las Vegas. Lufkin was one of the ten rodeos selected to be apart of this exciting event. The ten-tour rodeos were televised on prime-time television on TNN.

The Rodeo Association funded $120,000, to help finance the completion of the new Exposition Center. Another $50,000 was pledged in 1985 to help build the new Wilson McKewen Reha-bilitation Center. Annual contributions to the Foundation Fund of the Rehabilitation Center have seen the fund grow to almost $1,000,000. In 2003, the Rodeo Association named the Lufkin State Supported Living Center as an additional major beneficiary of the proceeds due to the extensive cutbacks in State funding, the Board recognized how vital the State Supported Living Center is to the community.

The fellowship, which was created in 1973, takes its name from the founder of Lions Club International (LCI), Melvin Jones.  It is an honor - not an award.  The fellowship was established as LCIF’s highest form of recognition to acknowledge an individual’s dedication to humanitarian service.

The Z&OO Railroad at the Ellen Trout Memorial Park & Zoo was the “brainchild” of Past Club President Dr. George Thannisch.  Lion George provided the leadership and work skills to complete the initial depot, track, etc. which was completed in 1970.  The Z&OO Railroad provides rides to about 70,000 passengers a year.  The Club hires an engineer to run the operation, but Club members assist each Saturday and Sunday through the year selling tickets and acting as back-up engineers.  The Z&OO Railroad facilities were completely replaced or renovated during President Tom Gann’s administration in 1983-1984.  New equipment purchased included a locomotive and three coaches, a new depot building and a complete renovation of the track system.  Total cost of the project was about $165,000.  Funds were obtained from various sources - Lion members bought interest free bonds, T.L.L.  Temple Foundation, Southland Foundation, local businesses and industries made sizeable donations.  The Angelina and Neches Railroad provided the manpower to construct new track facilities.  The C. P. Huntington authentic 1863 locomotive and the real 1863 style coaches are a valuable attraction to the Ellen Trout Park and Zoo.  Lion Butch McMullen was chairman of this, the biggest single project ever undertaken in the 63 year history of the Lufkin Host Lions Club.  The Z&OO Railroad operation was also established as a separate non-profit organization in November, 1983.  Board members are appointed yearly by the Club President.  Other committee members serving 1983-1984 were - George Thannisch, James Croley, Paul Mayberry, Duane Dargis, Buck Doiron, Scott Semlinger, Hollis Massingill, Sandy Skelton, and Tom Gann.  Lion Dick Gardemal was in charge of the depot construction, which has a likeness of the old depot located at one time on Cotton Square in downtown Lufkin.  Thus Lions year 1983-84 is known as “the year of the train”. The total indebtedness has now been retired. A ceremony was held at the Club’s regular meeting on March 7, 1989, to “burn the note”. The Club will now have $15,000  to $20,000 per year for community service needs. In recognition of his tireless efforts and endless contributions on behalf of the Z&OO Railroad, in 1995 our club named the depot in honor of Lion George Thannisch.

In 1998, the tracks were rerouted in conjunction with the expansion of Ellen Trout Zoo. Many thanks to Lufkin Industries for refurbishing the railroad cars, Angelina Hardwood for donating new slats and Signs by Joan Futch for donating the decals. In the Fall of 2004, the Lions Club welcomed their brand new locomotive to replace the one that has run for almost twenty years.

Our Club pledged the largest amount of money in a county-wide effort to pay for a new Salvation Army building—pledging and already paying $25,000.  In an annual effort, the Club members man the Army’s Christmas kettle striving to bring in more money than the other civic orga-nizations.  In 1982, one day’s work raised $4,000 (a new record).

From the Lions so-called “Tailtwister Fund” comes funds to provide the needy in the community with sight restoration and eyewear.  Several pair of new eyeglasses were distributed during the past year, with no charge made to those who were unable to pay.  Lion Robert Anderson, O.D. assist in the program, and Sumner Osgood is the eyeglasses committee chairman.

On LIONS WORLD SERVICE DAY in October each year, the Club chooses a worthwhile project as a community service.  Past projects included home repairs for the elderly.  In October, 1986, over 20 Lions members constructed flower beds and planted shrubs adjacent to a new building at Lufkin High School.

Our Club has always supported Lionism on the State level.  When the Texas Lions Camp in Kerrville started in the early 1950’s, the Lufkin Host Lions Club was one of the largest contributors. Several local physically challenged children attend Lions Camp each summer due to our efforts.

In May of 1991, our club participated in Operation Clean Sweep in conjunction with Angelina Beautiful/Clean. A group of approximately 15 Lions led by Lion Ron Temple spent a Saturday renovating a dilapidated home for an elderly gentleman.

On October 17, 1995, the Lufkin Host Lion Club, with President Jeff Horn presiding celebrated the 75th Anniversary of the club. James E. "Jim" Ervin, Past International Director was the guest speaker. A history of the club was profiled and narrated by Past President Trey Henderson. Past President George Thannisch inducted and presented Mary Ellen Marshall, our club pianist, as an honorary member of the club. It was an honor she so we deserved.

In January of 2006, the Lufkin Host Lions Club, with President Ben Bartlett presiding celebrated the 85th anniversary of the club. Lion Ebb Grindstaff, former International President was the guest speaker. A slide show was presented profiling the history of our club and the lasting contributions we have made. Lion Paul Mayberry was presented the first ever “Lufkin Host Lions Club Lifetime Achievement” award.

The Lufkin State School Supported Living Center, the Exposition Center, the Z&OO Railroad and other club projects mentioned represent the active force of Lionism in Lufkin and  Angelina County.  With a membership of over 285 Lions, the amount of energy and enthusiasm generated at one weekly noon meeting alone is impressive enough.  That energy, channeled by various officers and team captains into one fund raising project or another, is something the community should be aware of and value.  Club members have a desire to serve the community.  Members plan which projects will be the most beneficial and then carry it out.

In the words of a Past President of the Club, “I’d like to think that our membership is dedicated to solving community problems and needs on a local level.  We all need to put something back into our community.  If not, we lose the ‘American Way’ for future generations.” 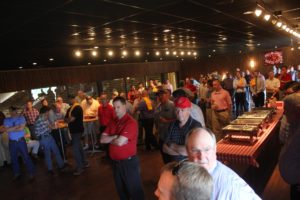 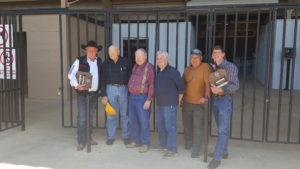 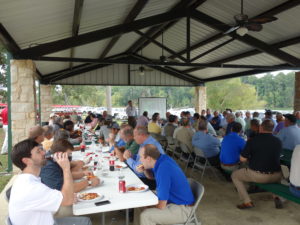 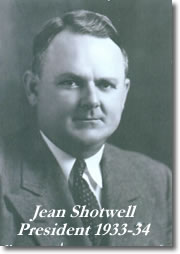 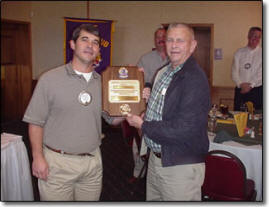 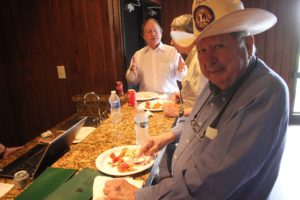 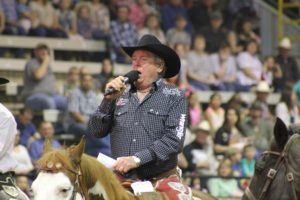 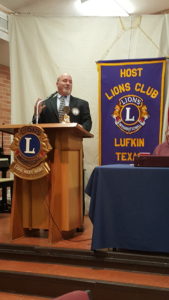 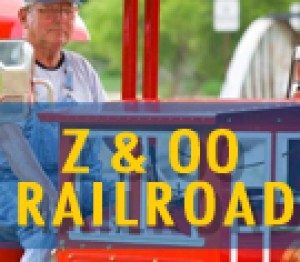 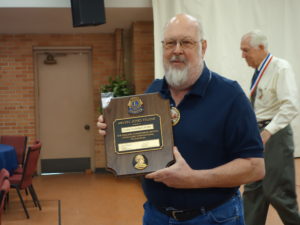 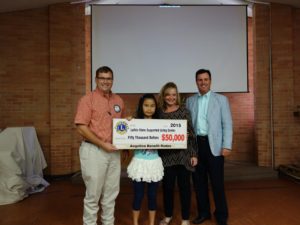 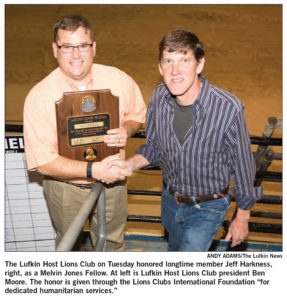 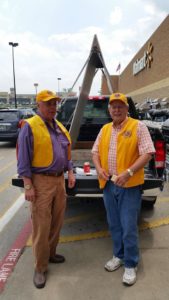 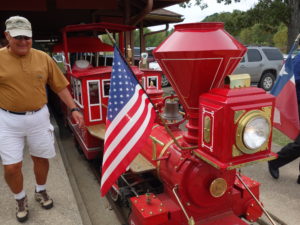 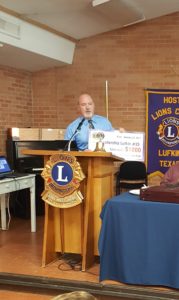 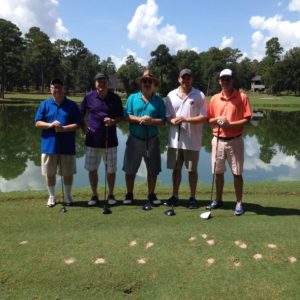 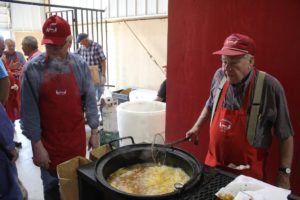 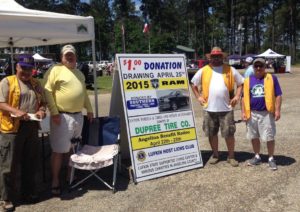 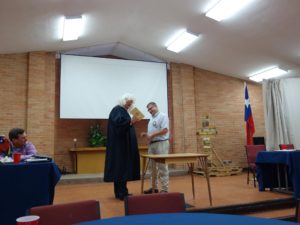 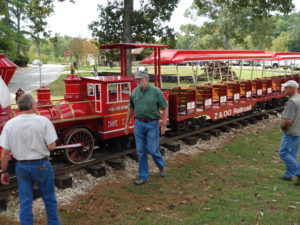 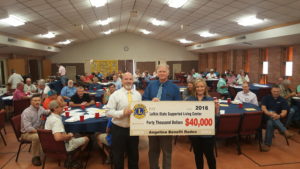